Automatically test changes at pull request and get feedback faster
from stakeholders BEFORE a change is shipped to production.

No one has to wait to see changes in production!

The life of a feature or code change starts with a short-lived branch. Once a developer has written the code for a change and it is ready for testing, an ephemeral environment is created based upon the specifications of the pull request.

Roost’s proprietary technology tests the code changes against a relevant set of upstream and downstream services. Once all the tests are done, a preview environment can be shared via a custom URL with all stakeholders, including the devops team and product management, to provide real-time feedback and validate their deliverable. This approach accelerates the release cycle as it shrinks the lead time to change and also reduces the change failure rate.

Quality assurance (QA) teams can test and find bugs earlier in the cycle as they can test during the primary release cycle rather than creating a separate isolated stage for QA. Team members do not have to wait for an environment to get free before they can do their testing as separate ephemeral environments are created for every change.

Product teams certify pull requests (PR) and provide feedback asynchronously and independently, during the critical path of a release.

Once product managers are satisfied that there are no gaps, they can certify the pull request so that it can make progress towards being merged.

Sales teams can demo product enhancements with on-demand environments and be confident that the latest product features and capabilities are enabled.

They also determine how long each cluster is allowed to run when spinning up the demo site.

Stakeholders become part of the critical path of the release process rather than another phase of a bloated SDLC. This 3-step process (build, release, deploy) narrows the gap between development and production environments, which accelerates release cycles. 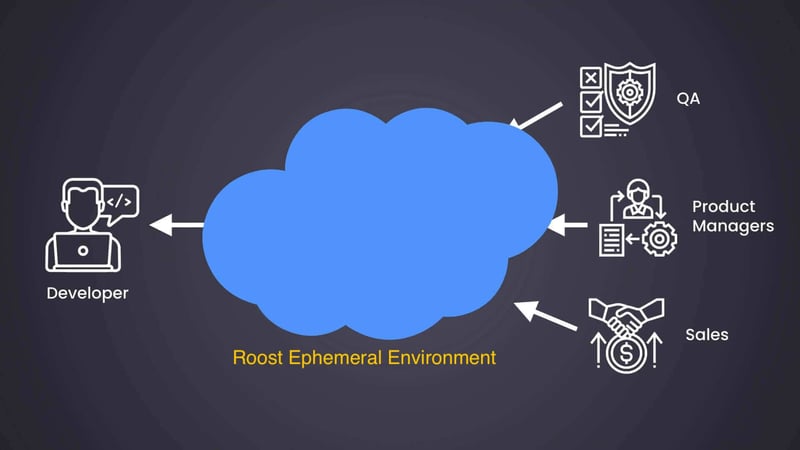 “The Roost platform has helped us tremendously by providing multi-tenancy clusters on top of EKS clusters. We can now easily deploy, upgrade and monitor these clusters… Roost also allows our development team to easily share improvements with the  product team for feature reviews.”

Here are some frequently asked questions that help you understand the power of Roost's ephemeral environments.

What is an ephemeral test environment?

What is ephemeral infrastructure?

Ephemeral infrastructure is connected to your software application logic and deployed when you promote changes via the release pipeline.

What are ephemeral deployments?

An ephemeral environment is a temporary standalone deployment of a software application. Ephemeral environments can be automatically generated with a pull request for any given branch in a repository, allowing collaboration, testing, and previewing new features prior to a merge request.

What is an ephemeral pipeline?

Ephemeral environments last for a short amount of time. For example, they could be as short as the lifecycle of a CI/CD pipeline, or they could last for a few weeks, depending on the code sprint. In other words, ephemeral pipeline involve ephemeral devops environments during the release pipeline.

What is a production environment?

What is a pre-production environment?

A pre-production environment provides software engineers with an on-demand service integration testing and validation tier that resembles production as much as possible. Code changes are automatically tested when a pull request is raised, eliminating the need for traditional testing and staging environments.

A staging environment is static in nature. It is a setup that replicates the complete production environment and is designed to test code changes, builds, and updates to ensure quality under a production-like environment before application deployment.

Development and/or testing environments can be static or dynamic in nature. A dynamic environment is automatically created upon demand or pull request using the latest data, artifacts, microservices, as production, whereas a static environment has resources that are already provisioned.

Watch a short demo video to see how we do it!